As I’ve said before, a lot of my Social Security Disability clients have diabetes, some of whom are “brittle” diabetics, meaning their bloods sugar levels are very hard to control or are considered uncontrollable.  My local newspaper had this article in it today.  It’s amazing what service dogs are able to do!  Having a service dog like this would give such peace of mind to hard-to-control diabetics. 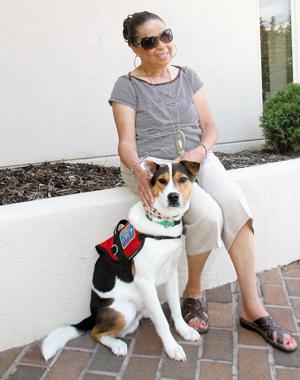 Pat George with her diabetic alert dog, Hamlet. George flew to Omaha, Neb. to pick him up. He’s been here now for two weeks and is getting used to his surroundings and responsibilities.

Living alone can be a scary thing, but add a chronic illness like diabetes to the mix and the danger level increases tenfold.

According to the American Diabetes Association, 29.1 million Americans had diabetes in 2012, which represents 9.3 percent of the population. The disease remains the seventh leading cause of death in this country. It is the leading cause of kidney failure and lower limb amputation not caused by an accident and also blindness in adults.

Pat George, a resident of Louisville, knows all about that. Diagnosed at the age of 16, this senior adult has dealt with diabetes for decades, but was having an especially difficult time recently. She had episodes where she blacked out and would come to, not remembering what had happened. She knew she had to do something.

Getting the heads up

Luckily, she heard about Heads Up Hounds several months ago. This agency trains and provides diabetic alert dogs to people just like George. The dogs are trained to know when a person’s insulin level is either too high or too low and to alert the person.

So George decided she would raise the money to purchase one of the diabetic alert dogs from Heads Up Hounds. The expense isn’t covered by insurance so George raised the money herself. She held three fundraisers here in Blount County and raised $5,000. The most recent fundraiser was a fish dinner held back in July at the Martin Luther King Jr. Center in Alcoa. The three events didn’t cover the entire expense of getting the dog, but they helped a lot, George said.

Less than three weeks ago, George traveled to Omaha, Neb., the headquarters for Heads Up Hounds. She spent three days of intense training with her new service dog, named Hamlet. George and Hamlet then came home to Louisville. They’ve been together ever since.

“He’s been everywhere with me,” George said. “He’s been to stores like Walmart and Sam’s. We go everywhere. He will be going to church with me on Sunday.”

The training in Omaha was only three days, but Hamlet’s training began months ago. George said after she decided to get a dog from Heads Up Hounds, they chose a dog that was right for her. “I had to tell them my height and weight so they could get me the right dog, one that wasn’t too big for me to handle,” she said.

After the dog was selected, George had to send swab samples she took from inside her mouth when her blood sugar was too high and when it was too low. Hamlet was then trained using those samples she shipped to the agency.

Heads Up Hounds used rescue dogs for its training, according to its website,headsuphounds.com.

George said Hamlet was rescued from a shelter in Kansas. He was about to be euthanized, she said.

So far, Hamlet has done his job. He has already alerted George when her blood sugar level isn’t normal so she could take care of it. She said they are still getting to know each other.

When asked about his personality, this new dog owner called him mischievous. She said she took him to a pet store to select his own toy. He had the stuffing pulled out before they got home.

“As it turns out, he had selected a toy with a beep in it,” George said. “He tore it apart to try and find it.”

One of George’s doctors, Dr. Casey Page in Knoxville, told her about the dogs. He had another patient who received one. George said she would definitely recommend them to other diabetics.

“He nudges me whenever my blood sugar level is high or low,” she said. “He has done really well.”

George grew up here and moved away, spending years in New Jersey and also California. She moved back 17 years ago when aging relatives needed her care. She has stayed.

Hamlet is easily spotted out in public with his service dog vest strapped to his back. George said she has to remind people that he isn’t a typical pet and whenever he’s out, he is working. People shouldn’t come up and pet him without asking, George explained.

It’s been years since George has had a dog. She said it’s been an adjustment but one she’s glad she made. She said she hopes other diabetics like her consider this alternative.