Tourette’s – The Inspiration for a Play

I have had clients with Tourette’s and know it can be a very debilitating condition.  This article appeared in my local paper and I am so impressed that this student turned his experience with Tourette’s into a play! 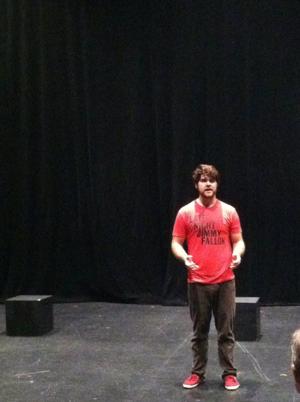 WHERE: Haslam Flex Theatre of the Clayton Center for the Arts, 502 E. Lamar Alexander Parkway on the MC campus

HOW MUCH: $10 adults/$7 seniors and students

It struck when he was 5 years old, and for a boy just starting out in school and life, it felt like his body was beyond his control.

“For me, it was like, why am I twitching? Why am I making these weird noises, and why is everyone calling me out for it?” Maryville College senior theater major Cameron Hite told The Daily Times this week. “It became not really a problem, but something I definitely had to learn to cope with pretty quickly and find some understanding on my own, and I didn’t really find that out until I got to high school and joined the theater department. When I’m on stage, I’m able to leave it all behind. It’s like this magical thing that happens, where I don’t even think about it.”

Tourette’s syndrome and Hite’s experience with it is the subject of “Impulse,” a one-man play that Hite will perform at the Clayton Center for the Arts this weekend. A native of Kingsport, Hite penned the play for his senior thesis, and because of the extremely personal subject matter, doing so became much more personal than any other school project.

“Last semester, I kept seeing the word ‘impulse,’ or ‘impulsivity,’ and that’s kind of how I describe it to everyone,” he said. “That’s how I describe the tics in general; they’re like something you can’t refuse. I wrote it last semester in Advanced Playwriting with Lisa Soland, and it started out as a 2-minute monologue, but when I read it in class, she asked me to extend it into a play.

“There’s just so much of me in this — me getting bullied, me playing sports to get rid of all that hyperactivity and excitement. I loved writing it, but it was stressful because I wanted to make sure I got everything out that I needed to get out, so people can understand not only me but the syndrome itself better. There’s a connection that definitely transcends just any other senior project.”

The play is autobiographical, although Hite’s on-stage portrayal is of a fictional character known as “Jake.” He’s being directed by University of Tennessee professor Terry Silver-Alford, and because it’s not a monologue-based one-man production, bringing it to life for this weekend’s performances has proven to be a challenge, he said.

“I wrote in different scenes, and I play multiple characters who have multiple lines of dialogue in every scene, so I’m jumping from narrative to narrative and character to character,” he said. “It was a huge challenge for both the writing and the rehearsal process.”

Tourette’s syndrome is one of a number of tic disorders, usually characterized by physical, or motor, tics and at least one vocal tic. It’s categorized as a neuro-psychiatric disorder, but because of its history as a bizarre disorder and the common misconception that Tourette’s sufferers walk around screaming obscenities (a separate disorder, incidentally, called coprolalia), it’s not talked about on the level of depression, schizophrenia or other neurological issues. That’s something Hite hopes to change with “Impulse.”

“For me, my arms would jerk, and my shoulders would tense up,” he said. “Normally, the person who has Tourette’s will maybe cough or clear their throat or making a barking noise. Interestingly, the people who shout obscenities are actually the most minor group of people with Tourette’s and tic disorders. Society really likes to associate that with what Tourette’s is, and part of my play is where I interact with people I just meet and how it can be misunderstood. There are some really funny moments in it.

“I don’t want people to think it’s an unapproachable topic. The reason I wrote the play is because I want people to understand me in a better sense so any questions they might have can be answered, because at first, some people are stand-offish about it.”

And, he added, it allows him to show that certain passionate endeavors — acting, for example — can transcend the grip such disorders have on the mind. When he’s on stage, he added, he’s able to forget, for a little while at least, that his body is sometimes outside of his conscious control.

“I’m trying to get across this part about me that in my childhood I was so discouraged and so unsure what to think until I got into theater, and my love for theater and acting serves as this huge escape,” he said. “This is my story, and I want to tell it.”